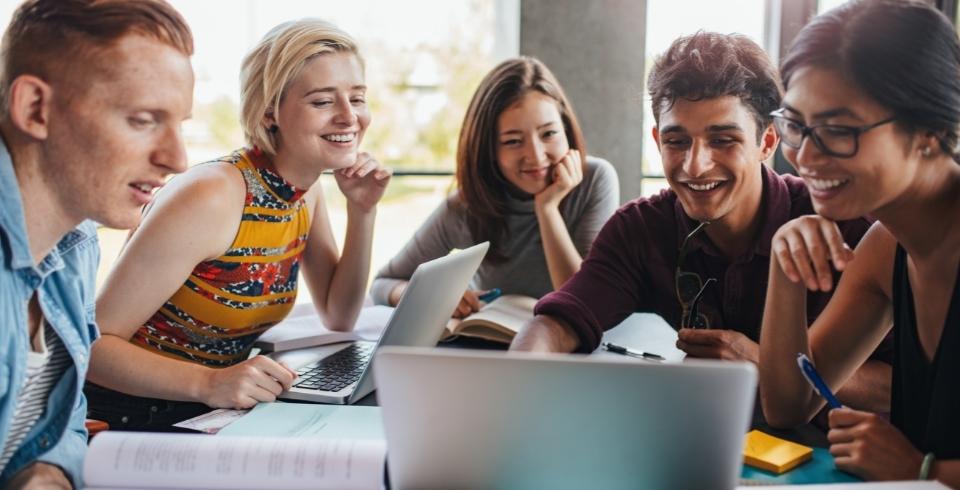 What is a CD Ladder (and Should You Have One)?

What is a CD and what are its benefits?

A Certificate of Deposit, commonly referred to as a CD, is a financial product that is offered by credit unions. They are a type of savings account that pays interest and reserves money for a certain length of time — the longer the term, the higher the interest. CDs are a secure and safe place to keep money that you aren’t planning to spend anytime soon. To initiate a CD, there is usually a minimum amount you need to deposit.

A CD is different from other types of savings or money market accounts, because you are assessed penalties if money is removed before the end of the term. By agreeing not to withdraw any money during the term of the CD, you will receive a higher interest return than other types of deposit accounts. You are guaranteed that you will get the return on the agreed rate regardless if interest rates fluctuate.

--Better rate of return
-- In exchange for liquidity, regular checking or savings accounts typically offer lower interest rates than CDs.
--Generally with CDs, the longer the term, the higher the interest rate. Therefore, CDs can be useful for sums of money that you don’t require immediate access to but also don’t necessarily want to tie up in a higher-risk, long-term investment, such as a bond.
-- The interest rate on a CD is generally fixed for the specified duration of the term. The security of knowing exactly how much you’ll get back when your CD matures provides peace of mind.
--Removes temptation to spend
When money is too liquid, it’s too easy to spend, so CDs can be an effective way of preventing you from spending your money on things you don’t really need, especially if you’re an impulse buyer.

-- Suppose that interest rates rise in the next two years. Locking some of your cash in a six-year CD means that you could have used invested it in a higher-earning CD.
-- It’s important to know that if you choose to withdraw the money before the maturity date, you’ll have to pay a penalty. For that reason, you should have a liquid emergency fund set up for medical catastrophes and other unforeseeable events; hardship withdrawals from a CD should be a last resort.

Is there a way to avoid these issues?

Yes! Supercharge your savings with a CD ladder strategy

What is a CD ladder?

CD laddering is a savings strategy where you invest in multiple CDs for varying lengths of time. One is, initially, shorter-term, while the others are successively longer-term. Over time, all CDs will help you maximize your earnings by earning the higher interest rate, yet one CD will become available each year if cash is needed, providing more flexibility than a single, long-term CD strategy. With CD laddering, a portion of your cash is freed up each year for you to reinvest in another CD at current rates (if rates are rising or level) or use for other purposes.

As the shorter term CDs mature, you’ll reinvest those funds into longer-term CDs and lock in the higher rates. Instead of initially locking up your money in the longest-term CD with the highest rate (up to 5 years or more), you create a CD ladder to safely move your money into higher rate CDs over time.
Eventually, you’ll have a ladder of CDs, all earning the highest interest rate available for your term. Ideally, at least one CD will mature each year, giving you access to some of your money as you need it. 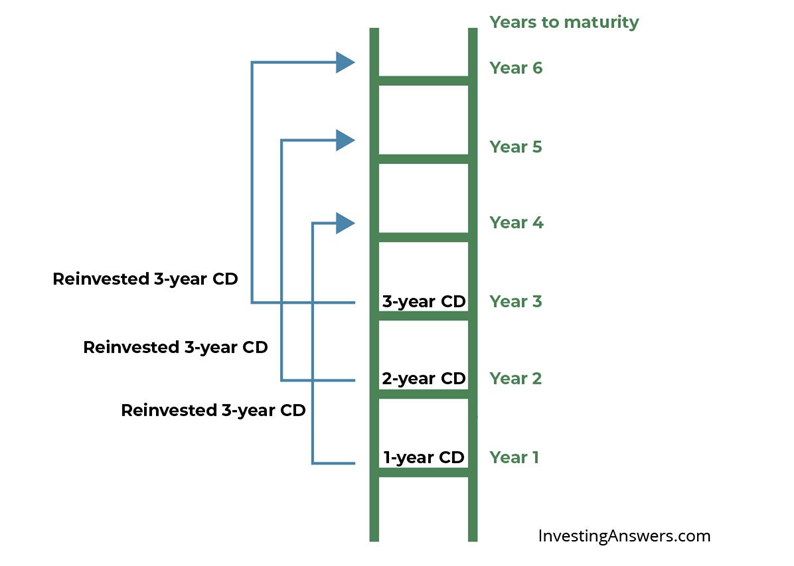 How can a CD ladder boost your income?

As interest rates rise, using a CD ladder can help you take advantage of rate increases and boost your income over time.
For example, if you invest $75,000 in a 5-year CD at 2% APY and interest rates rise 1 percentage point each year, the rate on a 5-year CD would be 5% after 3 years but you’d be missing out on those higher rates if your money was locked in for 5 years at 2%.

But if you took that same $75,000 and split it up into the CD ladder from the above example and still assume that interest rates rise at 1 percentage point each year, after one year, your first CD would mature and you could invest it in a 3-year CD at the improved 4% interest rate.

The next year, rates rise again and your next CD matures. You can now invest those funds into a 3-year CD at 5% interest. Finally, your original 3-year CD matures and you can reinvest at the new 6% interest rate.
Here’s what rising rate CDs look like over time using a CD ladder. 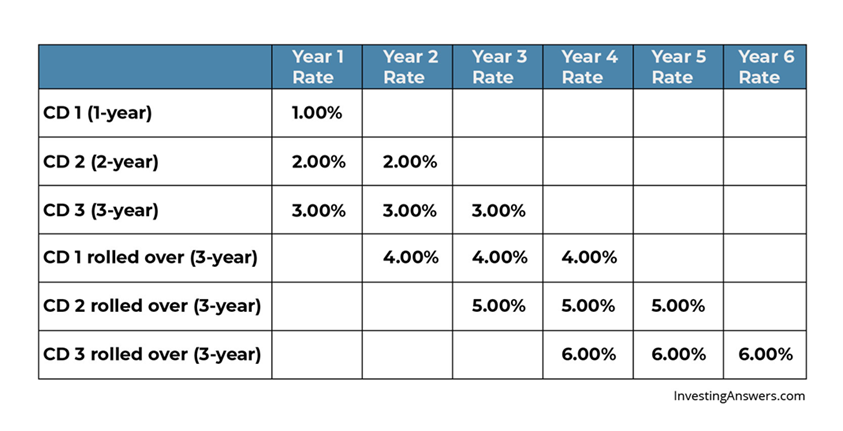 How do you build a CD ladder?

This all depends on your short- and long-term goals, and when you think you’ll need access to the cash. The goal is to take advantage of longer maturities and higher interest rates, while making some of your money available at regular intervals.

How to build a CD Ladder in 4 steps

2. Evaluate the term length that’s best for you
--Once you’ve determined the amount you want to invest, look at the term lengths for each part of your CD ladder. Remember: You’re opening short-term, medium-term, and long-term CDs, at equal intervals (usually annually).
--Look at your short- as well as medium- and long-term goals: Do you plan to buy a car in a couple of years? Do you foresee needing a large amount of cash for that wedding next year? Think carefully about when you need access to your cash and select CD ladder time frames to support your financial goals.

3. Open your CDs at staggered intervals
--Once you’ve determined how much to invest and the term lengths, it’s time to open your CD accounts. Split your money between each account and stagger when each CD will mature. This will give you several “rungs” in your CD ladder to grow over time, allowing you to reinvest and “ladder up” your interest rates.

4. Continue the CD laddering strategy
--As each CD matures, climb up the interest rate ladder by reinvesting those funds into the longest-term CD in your strategy. This will give you regular access to your money (at your set interval) and allow you to lock in the highest rates available. Continue this as long as it suits your investment strategy – enjoy the returns.
Is CD laddering for you?

Before laddering CDs, consider if the following applies to you:

While CD laddering can be a powerful savings strategy long-term, consider leveraging it as a supplement to a traditional savings account, which likely offers more liquidity.
--If you plan on building a CD ladder for the purposes of an emergency fund, make sure you have more frequent access to the funds. Instead of annually maturing CDs, consider ones that mature monthly or every 3 months.
--You may need to open several accounts to take advantage of the longer-term rates, but this can be a great way to put your emergency fund to work (without losing access to short-term funds if needed in a pinch).

CDs keep money secure while typically earning more interest than a checking or savings account. And if the account was opened with an institution that’s backed by the FDIC or the National Credit Union Association, the CD and its funds are insured up to $250,000 per depositor, for each account ownership category.

You've planned ahead so funds will be available for projected expenses.

Is there a big expense in your future, such as a wedding, college or business expansion? Think ahead and ladder CDs so they mature at intervals that will accommodate your financial needs.
--CD ladder for retirement
--A CD ladder can be a great way to invest for retirement and to create predictable income during retirement.
--When you retire, a CD ladder can help provide predictable income. If you start your ladder prior to retiring, you can complete the “laddering-up” process by the time you need the income and have several years of high-interest income available.
--CD ladder for college savings
--If you’re saving for college, many 529 plans offer the CD investment opportunities. You can create a college savings CD ladder to safely grow your interest earnings.
--Using a CD ladder for college savings gives you a predictable rate of return. And if you start early, you will have many years to “ladder up” your CD investments.

Stay on top of rates and maturity dates.
--If you expect rates to go down, lock as much as you can in a longer-term CD. If you’re living in a low interest rate environment, you may anticipate a rise and therefore, consider shorter-term CDs.
--Be flexible — if a six-month CD matures but pays a lower rate than it did previously, invest in a one-month CD until rates improve.
-- You may even find that savings or high-yield checking accounts sometimes pay higher interest than do shorter-term CDs such as three- and six-month CDs.
--Create calendar alerts for CD maturity dates so you can reinvest efficiently.