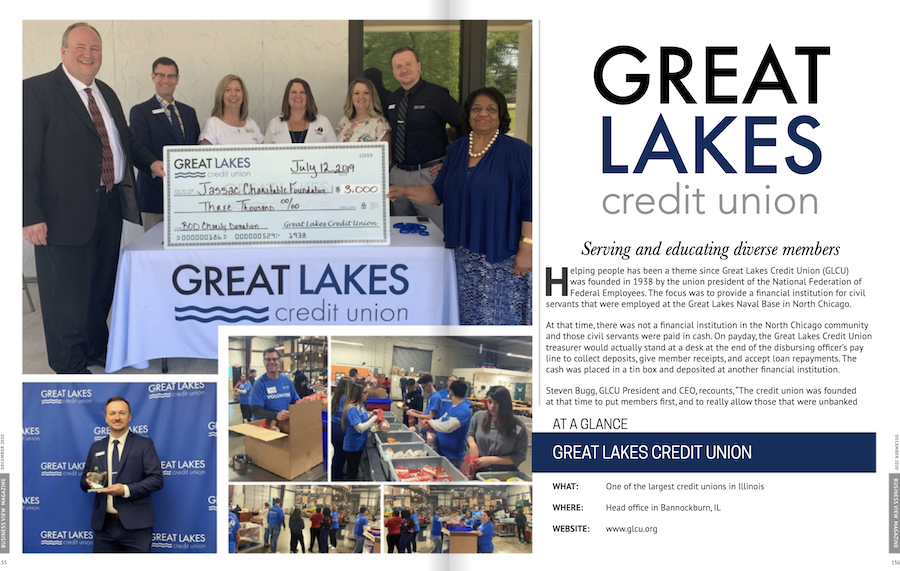 We are excited to share that GLCU was featured in the December 2020 issue of Business View Magazine. In this article, President/CEO, Steve Bugg, talks about how GLCU serves and educates diverse members.

Helping people has been a theme since Great Lakes Credit Union (GLCU) was founded in 1938 by the union president of the National Federation of Federal Employees. The focus was to provide a financial institution for civil servants that were employed at the Great Lakes Naval Base in North Chicago. At that time, there was not a financial institution in the North Chicago community and those civil servants were paid in cash. On payday, the Great Lakes Credit Union treasurer would actually stand at a desk at the end of the disbursing officer’s pay line to collect deposits, give member receipts, and accept loan repayments. The cash was placed in a tin box and deposited at another financial institution. Steven Bugg, GLCU President, and CEO, recounts, “The credit union was founded at that time to put members first, and to really allow those that were unbanked or underbanked to have an option to save money in a safe place and to reinvest those funds so others could borrow money. And those philosophies still hold true to us today.” As time went on, the credit union grew and took steps to expand its charter and geographic footprint. This led to new members and locations in the counties surrounding the greater Chicagoland area, from Kenosha County in Wisconsin, down through Chicago’s southern suburbs, including the City of Chicago. But the main branch is still located across the street from the Commissary, and that is the credit union’s busiest location.